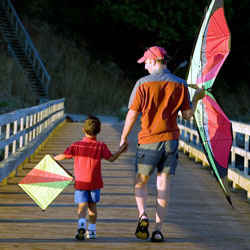 Kites have been flown for thousands of years, having first been developed in China about 3,000 years ago. Kites were originally used for scientific and military purposes. Almost everyone is familiar with Benjamin Franklin's electricity experiment using a kite flying in a storm. In the early 1900s Guglielmo Marconi used kites to help support antennas in early radio experiments. Before the advent of airplane, a Samuel Franklin Cody designed a kite that was capable of lifting a man in the air, which was used by the military for battlefield reconnaissance. During World War II kites where used as target practice by anti-aircraft crews. Downed pilots and shipwrecked seaman used kites to lift an antenna for the famous Gibson Girl radio which would transmit an S.O.S. signal.

Today kites are used mainly for recreation use. With constant improvements in technology and materials, kites are now used for many different recreational activities including kite buggying, kite aerial photography, kite kayaking, kitesurfing, kite mountainboarding, trick flying and of course for just having fun at the park or a beach. 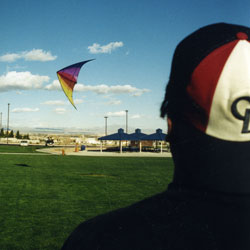 Stunt kites are flown using two lines, the direction of the kite is controlled by pushing or pulling on the right or left handle or a combination of both. With enough practice and experience these kites can perform a variety of amazing acrobatic tricks. Parafoil sport kites are similar to standard stunt kites in that they are flown using two lines. However, they are built for speed and pull not to perform tricks. Unlike standard stunt kites, parafoils have no spars (sticks) so they make a great first choice for those who want to learn sport or power kite flying as they will not break due to a hard crash landing. 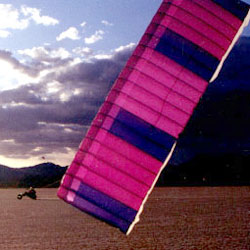 Power kites, sometimes called traction kites, are the engines used to pull a kite buggy at speeds up to 50 mph, help a kite surfer race across the surface of the ocean, and propel a mountainboard across open terrain and skiers through snowy fields. Most power kites today don't have any spars and controlled by four lines on handles or a control bar, the top to lines control the direction of the kite and the bottom two lines are the brake lines to slow the kite down. Because of the great amount of power and lift these kites can generate, we don't recommend you purchase a power kite if you have no experience flying sports kite, it is better to star with a dual line parafoil to learn the basics before purchasing on of these. 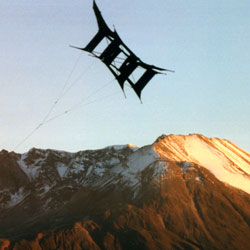 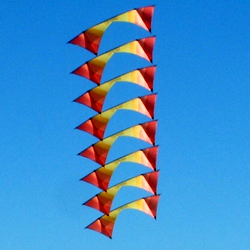 Revolution kites are four line sport kites with an unorthodox shape. They are known for their very precise maneuvers because of the four control lines. They can fly forward and backward, go from a 60 mph dive and stop and reverse on a dime, and larger ones have the pull to power a kite buggy.

Kite Flying How to Guides